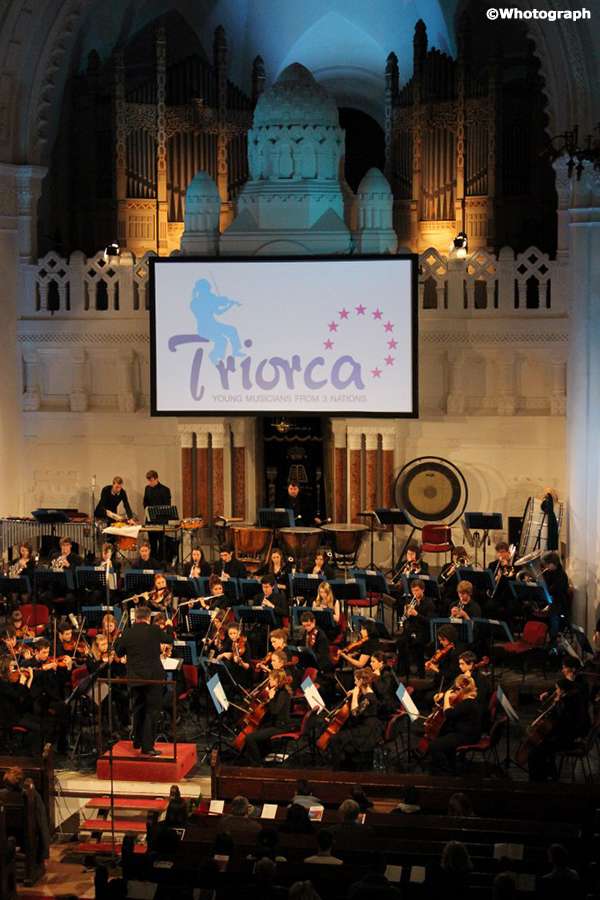 Triorca, the international youth orchestra comprised of young musicians from England, Serbia and Germany, performed at the Synagogue in Novi Sad, Serbia on the 15th of December. Following their debut in Koblenz, Germany in July 2012, the young musicians reassembled under the baton of Artistic Director Nicolas Daniel to prepare a programme of music by Shostakovich and Bizet, as well as a new work by the young Serbian composer, Ana Kazimic, written especially for Triorca.

Triorca is in its full scope a project devoted to communication, inclusion, and the very meaning of music.  It aims to help young musicians from England, Serbia and Germany share their experiences and different cultural backgrounds, learning together and from each other, using the international language of music.  Artists will benefit from culturally distinct approaches to developing professional ensemble playing and performance, and lasting friendships between the young musicians from different nationalities have already been formed.

The concert at the Synagogue on Saturday, December 15th was the climax of a residential music course for the orchestra’s 60 players held in Novi Sad from December 9th to the 15th.  Under Nicholas Daniel’s expert direction, the orchestra’s young players rehearsed together, developing their orchestral musicianship and gaining experience in orchestral playing.

Triorca’s orchestral programme began with the vivid Spanish tones of Bizet’s suite from his opera, Carmen, and it ended with a mighty Russian work of the twentieth century, Shostakovich’s 5th Symphony, a real tour de force for the young players.  The third work in the programme was the world premiere of a new work by the 27-year old Serbian composer, Ana Kazimic, created in response to a commission from Triorca.  The result was the suite called Balcando, made up of five movements, four dances and one song, whose title reflects the composer’s references to traditional Balkan music.

Triorca is made up of musicians from the Landesjugendorchester and Landesmusikgymnasium, Rheinland-Pfalz, Germany, the Norfolk County Youth Orchestra, Norfolk, England and Isidor Bajić Music School, Novi Sad, Serbia.  For this concert the orchestra had 22 players from Serbia, 24 from England and 16 from Germany.