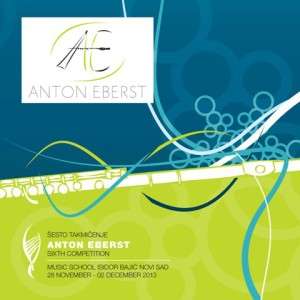 The Competition of young musicians is dedicated to Professor Anton Eberst, the founder of NOMUS (Novi Sad Music Festivities) and the Novi Sad wind instruments school.

The Competition is held annually in November, with the focus alternating each year between clarinet and flute. The Sixth Anton Eberst Competition (discipline – flute) took place at Isidor Bajic Music School from November 28 to December 2, 2013.

The contestants competed in four categories: Baby Category (up to 13 years), Category A (up to 15 years), Category B (up to 19 years), and Category C (up to 28 years).  The total prize fund for the Competition was 2700 Euros.

The general patron of the Competition is the City of Novi Sad. The Vojvodina Province Secretariat for Culture was for the first time also a patron, while friends of the Competition include: Pijetro Damineli (Slovenia), Music Media Center (Serbia), The Miodrag Azanjac Flute Association (Serbia), Toska Service for Woodwind Instruments (Bosnia and Herzegovina), and Music and Media Service for Woodwind Instruments  (Hungary).

The Sixth Anton Eberst International Competition would especially like to recognize all the teachers and students of the Isidor Bajić Music School Wind Department for their dedicated contribution to the successful realization of the Competition.