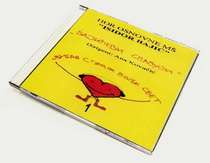 The exceptional results and popularity of Bajić’s Nightingales Choir, which consists of elementary music school pupils and works under the artistic guidance of Ms. Ana Kovačić, served as the motivation for the preparation of yet another (the fifth) musical edition by  Isidor Bajić Music School. The audio cassette Love Makes the World a Better Place – Bajić’s Nightingales was recorded and published during the 1999/2000 school year. This same year, the choir also earned its first feature concert, joined by the Orff Instrumentarium Ensemble and the High School Chamber Ensemble. Since this feature premiere, Bajić’s Nightingales Choir has gone on to take part in numerous concerts, hold a number of feature performances, and win prestigious awards at numerous competitions, all of which led to the transfering of the original audio cassette to compact disk format.