In 2009, Isidor Bajić Music School marked its 100th anniversary.  In the same year, the Elementary School String Orchestra Bajić’s Young String Players and I marked an anniversary of our own – 20 years of existence for the Isidor Bajic Music School Orchestra, an anniversary I celebrate along side as Director and Conductor for the entirety, having begun work with the Orchestra only five years into my own pedagogical career.


When I look back at these past 20 years, I consider the continuity of work with the orchestra my most significant success.  I can also proudly claim that the Music School Isidor Bajić String Orchestra has been ranked as the best in the country for many years.  The total of 24 first prizes that the orchestra has won, a number which includes 4 special prizes and 4 laureate titles, have surely contributed to the achievement of such a position.

Several compact disc recordings and numerous concerts held in the country and abroad, as well as the generations of accomplished musicians who made their first steps in orchestral playing under my supervision in the String Orchestra, all serve as additional proof of our success. 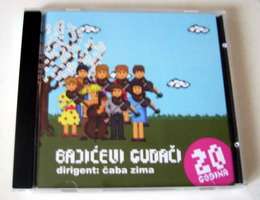 For more information about the CD, please click on the image

Music recorded on this CD is a present to all my former and current students.  The memory of the wonderful moments we lived through together, of exhausting rehearsals, of all the notes we played (right and wrong), of all the emotions we invested, of tears and laughter, of all of our journeys, applauses and successes, in short, of ALL that has contributed to make the past 20 years what they are.